How to achieve IMPACT: Use high contrast 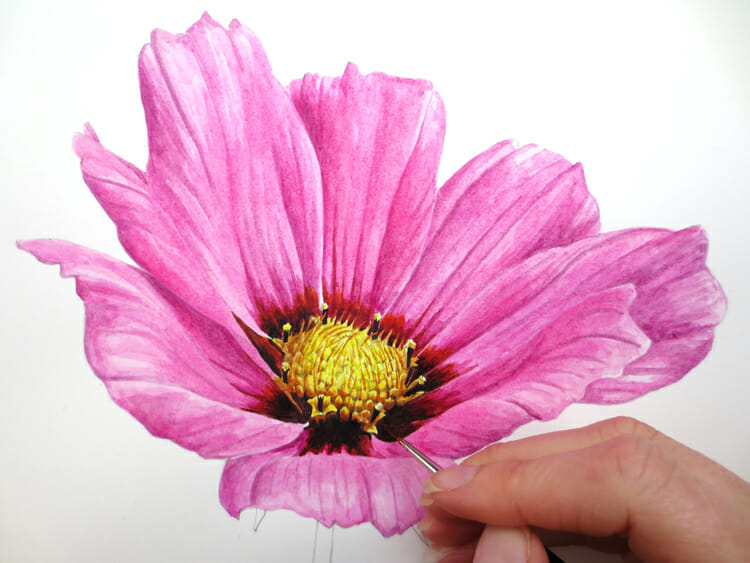 A painting with high-contrast has a wide tonal range – from very light tones, to very dark tones. And creating high-contrast within a painting makes it appear more 3D.

Capturing the range between lights and darks replicates the way that light falls on our subject and tricks our eyes into believing that the subject in a painting is 3D.

And our eyes tend to be drawn to the area of a painting with the greatest contrast – where light tones meet dark tones. So having plenty of these areas within a painting makes it more dramatic and impactful.

I’m completely self-taught and have developed a watercolour technique in which working with contrast is fundamental. You can see from these photos of me painting a Cosmos, that I build contrast in from the start.

In watercolour we have to be so careful not to take any areas of our paintings darker than they need to be – because we can’t really lighten them again once we’ve done that. And because colour is relative (meaning it appears differently depending on the colours surrounding it), I find that it’s only by getting the lightest and darkest tones in place early on, that I can accurately assess how dark I need to take my midtones.

This Cosmos also demonstrates the fact that colour is relative and that high contrast creates much more impactful results. Once the dark area around the yellow centre is in place, the contrast is so strong that the yellow seems to jump out in comparison, drawing the eye and creating much more impact.

2) Working on the midtones is a process of bridging of the gap between the light and the dark tones. And once the midtones are in place, it is usually possible to judge that the darkest tones need a further and final darkening -again widening the tonal range:

3) With the darker colour around the yellow centre, it appears much brighter:

4) After I’ve worked into the yellow centre as well as further darkening the area around it, the centre of the flower contains high contrast with the light yellows right next to the darkest browns.  This creates a really impactful focal point of the painting which draws the eye:

This pink flower is available in my book ‘The Modern Flower Painter’ as well as a full step-by-step tutorial in my online School.

Leave a reply Click here to cancel the reply

We use cookies (not the yummy ones) to give you the best possible experience on our website.

You can find out more about which cookies we are using or switch them off in settings.

This website uses cookies so that we can provide you with the best user experience possible. Cookie information is stored in your browser and performs functions such as recognising you when you return to our website and helping our team to understand which sections of the website you find most interesting and useful.

If you disable this cookie, we will not be able to save your preferences. This means that every time you visit this website you will need to enable or disable cookies again.

These are cookies that provide information to other companies. We use:

Targeting cookies help us to provide you with tailored content and special offers, based on your past interactions with the site.